The Poe celebration continues with a retro review from March 13, 2009. 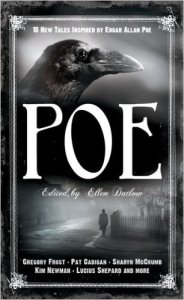 So what does a Poe fan get in this anthology of dark fantasy, suspense, and horror?

“Inspired by” covers a lot of ground here. Sometimes the Poe reference is so dilute, an allusion to a Poe character or story or setting or even a color that it is only the author’s afterword that makes the connection clear. Sometimes Poe just triggers an associational nostalgia in the author, and the story has more to do with the author’s youth than Poe. Sometimes the stories are a not very thinly veiled retelling of Poe stories. Sometimes the author grapples directly with the meaning or implications of Poe themes and images. Sometimes, despite the stated editorial prohibition against it, Poe shows up as a character.

The first story, Kim Newman’s “Illimitable Domain“, sort of stands apart from everything else in the book. Newman’s knowledge of films and love of Poe gives us sort of a funny and, in the end, horrific alternate history in which those Roger Corman adaptations of Poe are just the beginning of Poe’s encroachment into modern popular culture. This isn’t the first time Newman has used Poe in his fiction, but those other examples have been Poe as a character. Here Poe the writer ultimately scripts reality itself.

The finest stories in the anthology are Barbara Roden’s “The Brink of Eternity” and John Langan’s “Technicolor”. Roden looks at self-annihilation in the quest for knowledge and returning to some cosmic unity, themes found in Poe’s “Ms. Found in a Bottle” and “A Descent into the Maelstrom” and his odd work of poetic philosophy, Eureka. The story’s protagonist, roughly a contemporary of Poe, compulsively feels drawn to explore the polar regions and that exploration deliberately alludes to Poe’s novel The Narrative of Arthur Gordon Pym of Nantucket. Langan’s story is told as an English professor lecturing on Poe’s “The Masque of the Red Death”. He gives us a secret history that inspired Poe’s tale, the real meaning of its enigmatic color sequence, what a grief stricken Poe was up to in the last week of life, and, like Newman’s tale, a Poe that is a gateway to far more than just good literature.

Not quite as good as those two stories, but still very good, are Melanie Tem’s “The Pickers” and Steve Rasnic Tem’s “Shadow“. Both are takeoffs, but not mere retellings, of Poe works. “The Pickers”, inspired by Poe’s “The Raven”, has a depressed widow, trying to care for her infant, confronting a strange group of individuals, part gypsy, part crow, and part of nature’s way of recycling unwanted items – whatever they may be. “Shadow” takes its ominous tone, choice of narrator, and title from Poe’s “Shadow – A Parable”. Here a niece, increasingly isolated and frightened of the outside world and the plague of social disorder that seems to be slowly infecting it, watches a videotape from her dead “crazy” uncle.

Three not so exceptional stories also rework Poesque images and motifs: Delia Sherman’s “The Red Piano”, Nicholas Royle’s “The Reunion“, and Glen Hirshberg “The Pikesville Buffalo“. Sherman’s story and its title instrument combine the idea of souls shared with inanimate objects, as in Poe’s “The Fall of the House of Usher”, with all those “pale, learned, sickly, beautiful, and doomed” women of his most famous works. Royle’s story uses the idea of doppelgangers to no real interesting effect. Hirshberg’s takes up the transmigration of souls, used by Poe in “Metzengerstein”, but embeds it in a too long tale of family schmaltziness. There is certainly no wonder or horror there.

Fairly straightforward retellings of Poe’s “The Masque of the Red Death” and “The Fall of the House of Usher” are in, respectively, Suzy McKee Charnas’ “Lowland Sea” and David Prill’s “The Heaven and Hell of Robert Flud“. The entourage of a film director retreats to a French villa while the Red Sweat gets closer in Charnas’ story, and a refugee from Africa, a born survivor, warily contemplates her options. Prill uses a rural Minnesota setting and the sort of eccentrics sometimes found in that sort of place to good effect.

Good stories, but not Poe stories, are Lucius Shepard’s “Kirikh’quru Krokundor” and Pat Cadigan’s “Truth and Bone“. Shepard’s starting point uses an unjustly overlooked Poe story, “The Domain of Arnheim”, to give us a beautiful community in a Venezuelan mountain valley. To this he adds the classic story hook of a mysterious mass disappointment. But then the story heads into Lovecraft territory with a bit of Eric Frank Russell’s Sinister Barrier thrown in – except no Russell or Lovecraft story would have such an strong, integral, and explicit sexual element. Cadigan – a writer I’m not normally fond of – presents a family of which each has a special, paranormal power. The power of the teenage protagonist happens to be seeing the exact time and nature of a person’s death. She charitably tries to use it to save the life of a bullying classmate.

The power and personality of Poe as a writer are part of E. Catherine Tobler’s “Beyond Porch and Portal” and Kaaron Warren’s “The Tell“. Tobler’s story has a fairyland shaped by Poe’s poems, a place where he is even imprisoned for a time. It’s an interesting story, but, despite the specific references to the writer’s fantastic poems, it oddly doesn’t feel like it has any special relation to Poe. Warren builds her not very interesting story around the literal heart of Poe and the powers its possession confers.

Gregory Frost’s “The Final Act” is a psychokiller story. Laird Barron’s “Strappado” is more interesting with its protagonist invited to a special exhibit by a notorious, perhaps murderous, group of artists who use bodies as materials. Both are good but, without the benefit of their afterwords, their Poe connection is barely visible.

Hohum stories without much interest or without much Poe are Sharyn McCrumb’s “The Mountain House“, a work of ghostly NASCAR racing; Kristine Kathryn Rusch’s “Flitting Away“, a stylistically skilled work that, being simply the description of a crime and its victim’s fate, has no interesting or novel ideas at its core, and M. Rickert’s “Sleeping with Angels” about a young girl figuring out, retrospectively, what was the probable fate of an abused girl she briefly befriended.

So, fans of Poe get five stories they will probably like for their strong Poe connections and that work as standalone tales and a handful of other stories that probably shouldn’t have been included here but are still good.