Since I’m working on a review of another Black Coat Press release, I thought I’d post something on the first of their offerings I read. 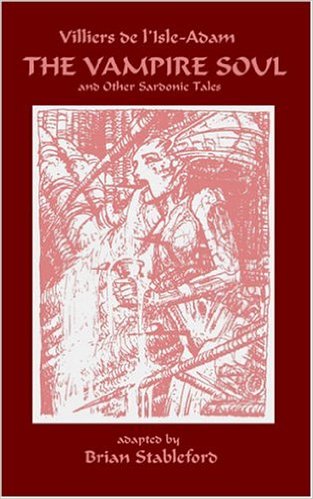 “Introduction“, Brian Stableford — Stableford, translator of these Villiers’ tales, talks about Villiers’ dubious family history. Contrary to what he claimed, his family may not have been related to the illustrious Villier de l’Isle-Adams that included a Marshall of France and a Grand Master of the Knights of St. John of Jerusalem (and the founder of the Knights of Malta after the order relocated). Villiers’ father constantly dug for hordes of money buried by aristocrats during the French Revolution — without any success and, thereby, accomplishing penury. Villiers seemed to have been something of a poseur in that he talked a lot about future products that were never finished or even started. Stableford even describes him as more being in love with the idea of writing rather than writing. However, Stableford also points out that being a poseur and entertaining conversationalist (Villiers was evidently something of an accomplished pianist and boxer) was rather common in the French literary world of the time — a world full of writers not making much money from their sales. And Stableford also points out that many famous French writers thought the man talented and promising. Stableford then talks about the influences on Villiers — he may not have always read the philosophical works he alluded to — which included the occult, German philosophy, and Catholic Revivalism. Stableford says Villiers has been ill translated into English making his tales — a mixture of terror, irony, and satire (including self-parody) even harder to understand.

“The Vampire Soul (Claire Lenoir)” — This was an odd story, hardly terrifying. It reminded me of one of those soft-core French porn movies where naked people sit around philosophizing for long periods of time before they get to the sex. Only here the philosophizing was before the “horrifying” conclusion. Doctor Bonhomet is funny as an unreliable narrator who unwittingly drops all sorts of hints as to his boorishness and unsophistication. (Stableford’s annotation helps a lot in explaining what works of art and what authors and musicians and political and scientific figures are being mentioned. He also explains the somewhat opaque underpinnings of the plot with Claire Lenoir having committed adultery with a naval man and repented. Her husband’s spirit (Stableford’s exact phrase is a “demonized fragment”) survives death and inhabits the body of a savage Ottysor islander. When the naval officer lands on the island, he is killed. Stableford seems to interpret the text in a rather Freudian (I don’t think he uses the term) manner with a savage part of the husband making up the part of the posessing spirit. I interpreted, in light of a chilling chapter epigraph “That which sees, in our eyes, watches from hiding on this side of the depths of our fleshy pupils.”, the story as involving a sort of savage, alien entity haunting part of the husband and the Ottysor. (Though you would have to explain his sexual jealousy, sublimated by the husband while alive.) Villiers really doesn’t do much with the vampiric notion. I think you can also interpret Claire’s remark about “There are other beings who know the roads of life and are curious about the paths of death.” (A dramatic enough quote that it’s featured on the book’s cover.) as backing up my interpretation though you could say she’s speaking about herself. According to Stableford’s introduction to the anthology, Claire and Césaire represent two modes of Villiers’ thoughts: Claire his Catholicism and Césaire his fondness for the philosopher Hegel. Evidently the philosophical themes of the story varied in each of the two versions. This later one (1887, the first from 1867) shows more of Villiers revived Catholicism. I wasn’t sensitive enough to get much out of this story, but I did like the bombastic bragging of Bonhomet who excuses his inability to engage either of the Lenoir’s philosophically by claiming he could — but he just doesn’t want to upset them.

“The Swan-Killer” — I’m not sure Villiers meant much more by this story than to take another swipe at the boorish, unsophisticated bourgeoisie symbolized by Dr. Bonhomet, but this story, in which he ludicrously puts on a suite of medieval armor and strangles swans because he finds their death cries sublimely musical (if “a trifle out-of-fashion”) is creepy. The satire comes in with the last line: “Reabsorbed in his comatose ecstasy, he ruminated over this exquisite impression, in his bourgeois manner, until the Sun came up.”

“The Eventualists’ Banquet” — This story was fun and clever for a couple of reason. Its 1887 publication date shows a France and Paris concerned with anarchism and political unrest. Dr. Bonhomet’s typically 19th century scientific society concerned with “bio-sociological” issues — to wit the curtailing of anarchist violence. Dr. Bonhomet comes up with a simple and brilliant observation: ” … there are only 24 hours in a day”. A rested populace is a troublesome populace. Thus he advocates a thriving nightlife of sex and drugs to keep the population distracted and tired. Stableford, in his notes, says Villiers was wryly talking from experience since there were many nights this night owl crawled home at dawn. He did a lot of writing in his night haunts as well as spinning out impromptu oral tales in salons or improvising music as he played the piano. Stableford says that Villiers would have also been reluctant to return home because he often lived in squalid poverty which made him, though a political conservative, sympathetic to the anarchists. Stableford also notes that “Eventualists” is a word coined by Villiers and probably a play on the title of a French political party: the Opportunists.

“Doctor Tribulat Bonhomet’s Motion Regarding the Utilization of Earthquakes” — Villiers takes a swipe at scientific arrogance and the bourgeois again. Here Dr. Bonhomet proposes taking all those people, those “soilers of paper”, who mock science’s inability to understand, predict, and control nature’s powers, specifically earthquakes, and putting them into a nice building — which will crush them when the predicted earthquake comes about. Villiers’ sympathies are pretty obviously with his fellow writers. Bonhomet is never a sympathetic figure — and rarely unironical. His paints all those who note science’s inadequacies as hopeless conservatives who long “to bring back idle kings, baronial rights and the Inquisition”. His plan also depends on a forecasting ability science hasn’t shown. And, of course, his final comment about the exchanging the lives of 6,000 honorable people for 6,000 “soilers of paper” is pretty vicious.

“Epilogue: The Marvelous Visions of Doctor Tribulat Bonhomet” — Perhaps the most blatant and sarcastic attack on Dr. Bonhomet. The unnamed narrator purports to be addressing unfounded rumors of the recent death of “our illustrious friend” Dr. Bonhomet. First, his hypochondria leads him to hire a wet nurse for him to suckle. Second, he has a conversation with God with which he has “displayed such wise antagonism”. God accuses him all of sorts of sins including lack of charity, tormenting the poor, and wallowing in indifference. Bonhomet gives such witty replies that God writes him off as hopeless, a “joker” and sends him back to join the other jokers. The story ends with the blast: “And it was at this Word, whose outmoded severity confounded the conciliatory play of the jolly repartee, that we were able to reopen the eyes of our illustrious friend — whose best, we feel sure, is yet to come.”

“A New Profession” — A satire Villiers wrote against the liberalizing of France’s divorce laws. (He was against it though he kept a mistress.) Basically, the existence of a Society of Divorcers is revealed by a freak accident — one of its members is accused of murder after his wife his killed by a small meteorite. The Society consists of young aristocrats who have bankrupted themselves and marry — for a cash remuneration, of course — young noble women who have gotten themselves pregnant out of wedlock. The husbands turn a blind eye to infidelity and later divorce with some cash.

“The Golden Candlestick Agency” — This bit of witty social satire, like Villiers’ “A New Profession”, is an attack on the liberalization of French divorce laws, in particular the provision (as stated in the opening of the story) that says “a legitimate wife, whose inconstancy is discovered in flagrante delicto, shall not be able to marry her accomplice”. Basically, the Golden Candlestick Agency exists to provide stand-ins for adulterous wives’ illicit lovers. The incriminating scene is set up, the identity of the lover established in court, and the newly divorced wife is free to marry her real lover.

“The Disquietor” — Stableford’s notes to this story state that its background of excessive public grieving is a comment on the “cult of sensibility” that entered French society in the 18th and 19th century via the writings of Jean-Jacques Rosseau. (In fact, Jane Austen’s Sense and Sensibility is a reference to this aesthetic according to Stableford.) The protagonist, Juste Romain, is founder and president of the Inventors to Excess (another one of Villiers delightfully named organizations). When he looses his composure when grieving at the funeral of his wife, a young man comes up and indicates he was the dead woman’s lover. The shock and rage cathartically induces a calm seriousness in him. When he gets home, he finds a letter supposedly from the Director of Funeral Ceremonies indicating that the young man was a “disquietor” hired to shock, with a wild story, Romain out of his public grieving. However, Stableford’s note indicates we’re pretty clearly supposed to see (with the April 1st date of the letter) that the letter is a hoax, that no such governmental body exists. (I would probably have missed that but for the note.) It’s not clear, at story’s end, the motives or identity of the disquietor.

“Maître Pied” — Another cynical satire from Villiers. Here he remarks on the passing fancy the democratic mob of politics imposes on strangers and the seeming value (with examples taken from French and Russian politics) of being labeled a scoundrel and criminal. Pied is the narrator’s (who has ambitions of being a poet and teller of truth — he says he is going to vote for Pied at the end because Pied is fully conscious of the strategy of scoundrely he his employing) hero and mentor. Pied tells the narrator that, if he wants to become rich, to just nail a nameplate saying “banker” to his office door. He doesn’t actually have to know anything to be taken seriously — witness the vast sums French bankers lost financing the original Panama Canal project.