I picked up this collection of two French novels thinking that The Ark, given that it was literally written in the trenches of the First World War, would have material for my World War One in Fantastic Fiction series.

That was not to be the case. It is from the war but not of the war. 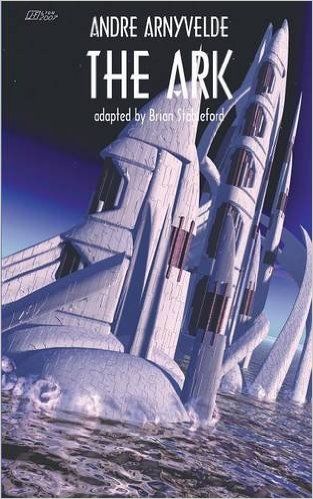 Right up front, I’ll say I can’t really recommend these two novels, The King of Galade (1910) and The Ark (1920), to anyone except a scholar of French sf, antiquarians, or those, like me, who are seeking fantastic works related to the Great War.

This review will not be spoiler free.

Stableford, in one of his usual thorough introductions, notes that Arnyvelde aka Andre Levy is still widely read today for his journalist pieces on many areas of the arts and sciences which include a lot of information on his contemporaries who were or would become famous: Marcel Proust, Claude Monet, Filippo Marinetti, Edmond Rostand, and the Giradouxes. (I’m not even going to wax wiki glib on these names since I recognize none except the first two and don’t care enough to research the others.)

The King of Galade is reminiscent of Samuel Johnson’s Rasselas in that its protagonist leaves a valley kingdom isolated from the Europe that surrounds it. (Or so my memory of Rasselas has it from decades ago. I couldn’t even be bothered to wiki that either. Are you picking up yet on the general apathy most of this book induced in me?)

The first part of the story talks about protagonist Emmanuel’s royal ancestor Harb who discovers a way into the outside world and builds his palace around it. He kills the Wise Men who complete a tunnel from their grotto to the outside from their cave. (Technically, he has a servant kill them after they complete the tunnel and then he kills the servant.) Harb builds a palace around the grotto and enjoys secret access to the outside world and makes trips outside to bring back “practical and spiritual information”.

The story then shifts to Emmanuel, the titular King of Galade. He’s so charming that the kingdom (and several husbands) don’t mind his many affairs with their many wives. He becomes infatuated with Melidine, a widow who won’t sleep with him. He suffers ennui before re-discovering his privileged access to the outside world. After concocting a story about going into monastic retreat for a year, he leaves his uncle in charge and enters our world.

At first, he finds the Europe ca 1910 technologically marvelous.Then he burns through his money and is forced to take a menial labor job. He then falls in with the world of the Parisian poor and anarchists. He becomes dismayed at how all the glorious things are not available to the poor. They not only don’t have the money, but their energy is sapped by manual labor. He is also bothered by life being bettered by technology but its benefits not fully shared with the poor.

Arnyvelde uses the metaphor of a coaler on a locomotive to address a standard capitalist apologia for this. He may be hurtling through the landscape like the rich, but he is forced into a life of regimentation and manual labor while some of his passengers don’t have that life.

A fellow laborer, an anarchist, asks Emmanuel to join in armed struggle.  Emmanuel agrees that the anarchist is right, all have the right to joy.

Then a philosopher from Galade shows up who advises him that every man “ought to demand from himself, and expect from himself alone”, that every man has the ability to live in the “realm of Ideas” before which voluptuousness and the “sensation of power” palls.  If we live in that realm, we will, upon leaving it for the world again, find the world changed and improved. Emmanuel returns to Galade and leads a spiritual revolution on these principles and finally is united with Melidine.

Essentially, Emmanuel is advised to do what the protagonist of The Ark does in wartime.

Started in the French trenches in November 1914 and finished in 1919, it reads like a combination dream vision and philosophical discussion. It is a difficult read. The only thing it has resembling a plot is the narrator, framing the story as a letter to his wife, meeting an “arcandre”, a mystical being with vast powers.

Levy, understandably for a miserable soldier in the trenches, discusses with the arcandre all the things hampering his great goal of Joy, the motive behind living. He will need vast powers to overcome the obstacles, and those powers, we learn at the end, will come through the science of the future. It’s a slog to get through some portions, but it develops a peculiar and compelling narrative drive at the end.

But as I extended my burning curiosity toward him, and just as I was about to question him, I suddenly saw him light up with a more ardent glare than that of the fantastic light that surrounded us, shining with an increasing scintillation, which became so intense, so various and so marvelous that even now, merely transcribing what was given to me then to contemplate, I am obliged to lower my eyelids, as if the mere memory of the moment were dazzling me.

There is no specificity linking this internal visitation to the land of ideas to the world Arnyvelde was inhabiting when he wrote it.

I finished The King of Galade on October 10, 2015. In preparation for this post, I had to make some notes on it. I had to skim the whole thing over again. It had almost entirely evaporated from my mind.

Both novels are about removing the obstacles to Joy (which is more than just happiness to Arnyvelde; it’s something like self-actualization).

In The King of Galade, it is social obstacles that prevent all from enjoying life, the benefits of technology are not enjoyed by all, wasted human potential. The Ark is concerned with more basic questions on how technology’s development can give us godlike powers and Joy.

One thought on “The Ark”