They do have one use: they publicize writers trying to make a living now rather than, a la Edgar Allan Poe, becoming a posthumous legend. Linda Nagata effectively makes that point.

But I am not a writer. My desires are not congruent with writers’. I do not find awards useful. I will also note that, as per the Arthur C. Clarke Awards she discusses, there are a whole lot of titles on that list that are not science fiction — the genre Clarke wanted to recognize through the award. I would argue that is a criteria so loose as to be useless.

Still I like the Nagata work I’ve read, so this is going be a the start of a review series on her Nanotech Succession. (I have not read her Red trilogy.)

The review is for the original edition, but the link is to the new Kindle edition which, I understand, has been slightly revised. 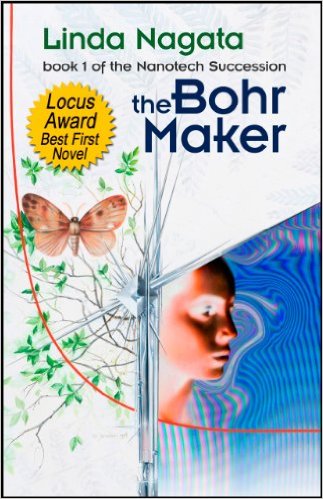 It’s not like I missed the debut of novelist Linda Nagata. I bought the original paperback of this edition when it came out, but it sat on my shelf unread until I read her recent young adult novel Skye Object 3270A set much further in the universe of this novel.

I was not disappointed by this novel nor did I find it dated.

My inner bureaucrat finds a fascination with stories built around the idea of controlling – but not totally suppressing – a powerful and disruptive technology. Here it’s nanotechnology, dubbed “makers” in this novel.

A Commonwealth, to which most of the humans of Earth and orbital habitats in the solar system belong, mandates that nanotechnology only be used in limited ways. Specifically, radical alterations to the human genome, beyond curing degenerative disorders – which include aging – and cosmetic changes to skin and hair color, are not allowed. Embodying a major exception to this is one of the novel’s central characters: Nikko Jiang-Tibayan. With his ceramic skin and ability to exist in the vacuum of space, Nikko is actually a science project authorized by the Commonwealth Police, a science project with a legally mandated end coming soon. Nikko begs his old lover, Kirstin Adair, who just happens to be the Chief of Commonwealth Police, for an extension of his life. Adair is one of the best things about the novel. She’s an unpleasant and fanatical adherent to the modern superstition of nature worship, a devoted protector of the Mother Goddess Gaia. Still, she’s not entirely unsympathetic. The makers do promise tremendous upheaval. That was realized by another old lover of hers, Leander Bohr, when he developed – but refused to release to other people – the most sophisticated and illegal maker of all, the titular Bohr Maker.

To extend his life, Nikko tries to get the sequestered Bohr Maker and sets in motion a series of events that will threaten his younger brother; possibly estrange him even more from his father Fox who designed him and the sophisticated orbital habitat they live in, a man whose experiments in maker development push the very limits of legality; entangle two ex-prostitutes, Phousita – a voluptuous and perfectly proportioned four-foot-tall woman – and Arif – possessor of a glow-in-the-dark clown face of long nose and bulging cheeks, in a cascade series of events that threaten the political and social order of the Commonwealth.

Phousita and Arif exist in a zone of Earth where the Commonwealth does not have complete control. The local authorities are given a certain amount of leeway, including allowance to dabble in the sort of illegal makers that created the alterations that led to Phousita and Alif. The fast moving plot, which starts out with Phousita being the accidental repository of the Bohr Maker, involves some interesting technological ideas one of which I think is rather novel.

Nikko and Adair and some other characters move about in electronic data streams as “ghosts” – recordings of personality and memory. They move in and out of bodies manufactured for them with only one legally allowed to be active at any one time. That was not even a novel idea in 1995’s science fiction. What is more novel is that these ghosts run as programs in “atriums”, seemingly parts of an individual’s brain altered by makers. The possibility of multiple ghosts being active at once and inhabiting the bodies of others for purposes of sex, hiding, and espionage is exploited.

There are plenty of science fiction stories that have used the idea of nanotechnology. Indeed, it’s part of the standard genre tool kit these days. While not as rigorous in analyzing the limits and possibilities of nanotech and how it might be used and controlled as Wil McCarthy’s Bloom, it is closer in feel to that than other stories where nanotech is a magical fairy dust.

In short, this novel has a fast-paced story with Phousita and Nikko and Kirstin as interesting characters, a plausible notion of how and why nanotechnology would be controlled, and a conflict with the nature of the human ecosystem at stake. A very strong novel and a fine introduction to the Nanotech Succession.

3 thoughts on “The Bohr Maker”