It turns out I had no additional Greg Bear material in the archives, so I’ll conclude my Greg Bear series by comparing another novel to his Blood Music. 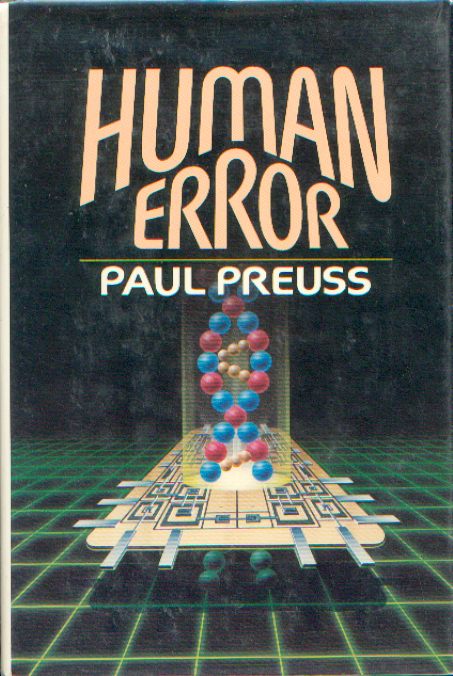 While it probably has been done already, this novel and Greg Bear’s Blood Music naturally suggest a compare-and-contrast essay.

Both were published in the same year (though Bear’s novel was based on an earlier short story of the same title which may or may not have inspired Preuss – there is a blurb from him on Bear’s novel) and both are based on the same idea: biological computers that develop sentience and become, as Bear’s novel has it, an “intelligent plague”.

Both novels have ugly, social misfit scientists who unleash – accidentally – the plague on man (both are even from the South). Vergil I. Ulam is a reckless, selfish, impractical man who foolishly – and unmindful of the dangers of infection even his non-scientist mother immediately sees – unleashes the noocytes in Blood Music. Adrian Storey of Human Error is less irresponsible, less criminal (Ulam tampers with computer records and tries to steal work from his employer) than Ulam but more careless in managing his Epicell work.

Both feature startling transformations in least a portion of man. At the end of Blood Music, man has been absorbed into a globe spanning civilization of intelligent cells (which, among other things, create their own macro-organisms) which appears to enter another dimension, the “thought universe”. The end of Human Error (and that title sums up a plot that pivots on greed, carelessness, and ignorance) has man entering a new time, “the beginning of the Golden Age” (the last words of the novel).

While both Bear and Preuss are fine writers, they approach the tone and style of their stories differently. Bear delivers a tale emphasizing alien communication, perceptions, and dimensions; he shows the externalities (for instance, a North America covered by his noocytes) of the noocytes’ implications; he covers the initial political disruptions from the plague (Russia contemplates nuking America). In other words, Bear works in the tradition of the sf story; while his writing is fine, he emphasizes the sense of wonder (and horror and terror and awe). Preuss works in a much more “literary” style. In other words, he is much more concerned with nuances of characterization (Though Bear does a good job with his characters, particularly the relation between Ulam and his mother, and has just as many. His characterization is more through dialogue than the internal thoughts of characters like Preuss.) Bear develops thematic variations through plots and subplots. Preuss delineates the changes in his humanity through dialogue and small scenes (like a narrowly avoided car accident). It is the soul and talent of man that has changed, a change that is not readily noticeable externally yet promises a golden age. (However, the question arises as to how human the infected characters are though they delight in their change. Still, the possibility arises – yet seems discounted in the end – that the epicell intelligence is merely masquerading as human. Unlike Bear’s noocytes, the epicell plague mostly expands pre-existing talents and pre-dispositions in its victims. Yet newborn children are more extensively modified with yet unknown abilities.

Both novels ultimately see humanity’s transformation as good. Preuss’ novel regards the plague as a divine gift. In both novels, the irresponsible scientist who creates this new life is killed. Ulam is murdered to stop his infection from spreading. Storey dies when his friend Toby Bridgeman tries to talk the plague into retreating from Storey’s body. Both novels feature ambitious and greedy scientists who make a bad situation utterly disastrous. It’s Nobel Prize winner Michael Bernard in Blood Music who seeks to exploit Ulam’s work. Jack Chatterjee, CEO of Compugen, spreads the Epicell plague by releasing computers based on it before the cells’ full potential is known. Bear covers the political turmoil unleashed by Ulam’s work. Storey’s invention leads to an attempt to suppress it by the NSA.

Another interesting point of similarity is that both authors organize their novels into parts labeled as “phases” of various sorts, nomenclature mimicking the biological development of other plagues. Bear approaches idea from the biological end and does a good job of describing the theory of intelligent, cellular computers. Preuss approaches the conceit through the computer end and explains things less clearly though it must be said that his descriptions of physicists, neurologists, computer scientists, doctors, and psychologists at work show he’s done a lot of home work.

What Human Error has much more than Blood Music is a fuller sense of thematic exploration, specifically the theme of human isolation – isolation from self-knowledge as wells as from other humans. Storey’s only friend is Bridgeman. Storey can’t understand women. Bridgeman is a womanizer who avoids the complication of love, who becomes what a woman wants but doesn’t come to love them. (After he’s infected, lover Joana Davies remakes him in a desired form – reprogramming him in effect). Joana Davies seeks to bring her mental patients – including the infected Storey – back in to the human fold. At story’s end she gets a precious self-knowledge (a strengthening of her interests and talents via infection). Also her brain damaged infectious nephew is restored to “normal” (his abilities will probably be extraordinary) development. Joana’s sister Susana forsakes marriage yet still has children. Storey is alienated from his family.

This is a good, rich book. I didn’t like as well as Blood Music because that novel’s science was better developed and the story grander though Preuss novel doesn’t suffer from Bear’s mystical ending.