Review: Down from the Attic: Rare Thrillers of the Silent Era through the 1950s, John T. Soister and Henry Nicolella, 2016. 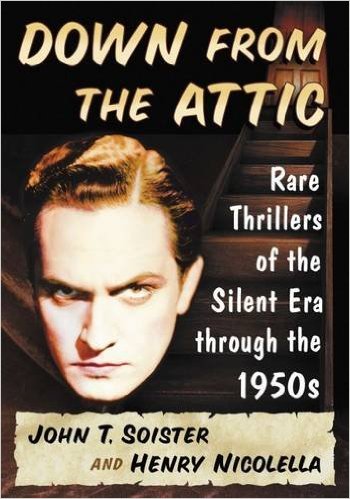 This one came free from LibraryThing, and the only reason I picked it up was the section on the various movie adaptations of Bernhard Kellermann’s 1913 novel Der Tunnel. I first came across reference to it in John J. Pierce’s Foundations of Science Fiction: A Study in Imagination and Evolution which described it as giving “epic scope to industrial sf” in its tale of constructing a transatlantic tunnel for rail travel.

I did like the opening chapter which covered the four movie adaptations of that novel. (And I watched the 1935 British adaptation Transatlantic Tunnel aka The Tunnel on YouTube afterwards. It’s mostly of historical interest though it has one memorable moment of unintentional humor and some interesting set design.)

Soister and Nicolella cover a movie or group of movies in each chapter. They do it with wit and engaging asides as well as covering a lot of film history. Films are always placed in a larger context be it biographical, the development of a genre, a nation’s film history, or accounts of certain film series and remakes.

It’s a book for hard core movie lovers, in this case those who love horror, science fiction, and mystery films.

Many of these movies are either vanished or available for viewing only if you show up at a museum or the Library of Congress. Literary reconstruction is the only way most of us can experience them though Soister and Nicolella often tell you where the extant ones can be viewed.

They also sum up the plot of the movies. That means you get some small print and mind-numbing, tedious plot synopses (often officially registered for copyright purposes with the Library of Congress). Worst is all fifteen chapters of Sky Ranger aka The Man Who Stole the Moon. (No, he doesn’t and the moon plays almost no part in the story.) It’s used as an example of silent, somewhat science fictioney, movie serials.

I’d already seen, years ago, the 1930 science fiction musical Just Imagine about the wonders of 1980. (Pills for food, resurrection from the dead, names like “J-21”, and New York City doing a sort of eugenics-lite in their marriage regulation.) Frederik Pohl did an entertaining essay, “The Demi-Docs: Just Imagine and Things to Come”, about seeing those films on their initial release for 1984’s Omni’s Screen Flights/Screen Fantasies: The Future According to Science Fiction, one of the movie books I do have once.

After reading this book, I’d like to see Death Takes a Vacation. (That’s Fredric March as Death glowering on the cover.) And I’d like to see the lurid, mad scientist “Hispanic Horrors” of El misterio del rostro pálido [The Mystery of the Ghastly Face], El baúl macabre [The Macabre Trunk], and Una luz en la ventana [A Light in the Window].

And I’d like to see the pacifist science fiction movie High Treason from 1929 in which the women of 1940 (or maybe 1950, the producers seemed a bit uncertain) try to stop a war between the United States of Europe and the Federated Atlantic States. It’s paired with the more ambiguous Men Must Fight as examples of interwar anxieties and opinions about another global conflict.

For completion’s sake, I’ll briefly list the other chapters

“Sherlock Holmes”, deals with the 1922 film of that name which was by no means the first film dealing with the famous detective.

Two other less literary, but still popular, stories and their first movie versions are covered in “The Monkey’s Paw [1923]; Sweeney Todd [1928]”.

Charlie Chan fans will be interested in “The House Without a Key”, the first movie serial with Charlie Chan, albeit on screen for about four minutes. It actually featured a Japanese actor as Chan.

“Forgotten Faces” looks at a 1928 thriller with an unusual premise: a criminal who wants to be killed by his victim. Based on Richard Washburn Child’s story “A Whiff of Heliotrope”, it was filmed three more times.

“Les Fantômes de Paris: Chéri-Bibi; The Phantom of Paris” looks at those two films and their place in the plethora of “phantom” movies.

“Fog; Terror Aboard” looks at two thrillers, from 1933, that featured “mayhem on the high seas” and that “sank at the box office”.

“The Horror: The Patchwork Cinema of Bud Pollard” looks at the eponymous film producer. His output may even have been less interesting than Ed Wood’s. The most interesting thing about him is that he literally died from a joke.

“Return of the Terror” looks at 1933, “not a banner year for the horror film” and a film based on an Edgar Wallace play featuring a “maniacal arch-criminal/master of disguise, and not some fiend of supernatural origin”.

“Der Hund von Baskerville” looks at one of Hitler’s favorite films, a 1937 adaptation of Arthur Conan Doyle’s The Hound of the Baskervilles.

The book’s subjects are arranged chronologically, and it concludes with the 1951 Czechoslovakian film Císařův Pekař a Pekařův Císař [The Emperor’s Baker, the Baker’s Emperor], a musical-comedy take on the Golem legend.