The Jerry Pournelle series continues with another item from the archives.

I sense a strong disappointment and too high of expectations in my younger self. 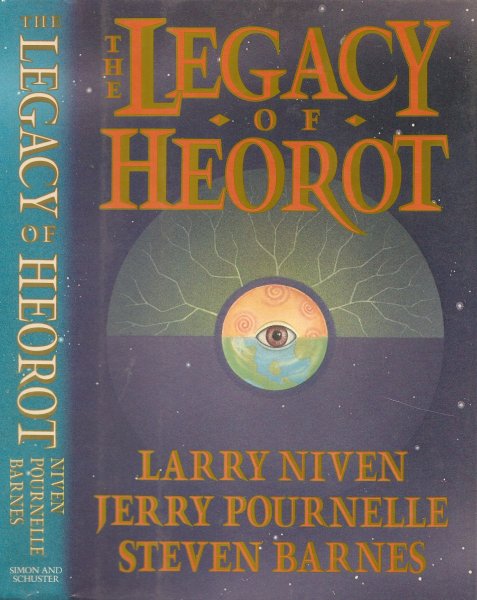 A disappointing novel that reads like a rush job plotted by all three and mainly written by Barnes (perhaps he contributed scenes from grendel’s point of view — some of the best parts of novel).

Ostensibly, a re-telling of Beowulf, the similarities are not very great.

Pournelle seems to have given us the only really well-done character (and even he could have been better done) in novel. Others are almost non-entities. Some characters we only get a name and no physical description! Very annoying.

Biologist Jack Cohen gave the authors the idea for the aliens. They are the best part of novel, but even they are, annoyingly enough, largely undetailed in terms of description. The novel seems a rush job to use Cohen’s idea and vaguely retell Beowulf (without any of the tragic grandeur of the saga’s end).

There is an unusual lack of detail for Niven and Pournelle (and shorter than their usual collaborations) in terms of technology and background culture of Earth. “Comcards” are never described.  [Ok, maybe I was just dense on what the word implies.] How and why was all this equipment brought along on voyage? Why is Earth boring? Details of solar system colonization are untold.  There is a seeming flaw in chronology of communications with Earth. Is there a global government (Cadmann’s experiences seems to imply so)?

There are shifts in viewpoints and almost no characterization. The pacing stalls between the first successful grendel hunt and final assault.

The latter is by far best part of book.

There is little description of scenery (maps are no substitute). Suspense is blown by revealing the grendel too early and never calling Caddman into doubt.

Several good elements could have made the story much better.

Terry the civilian becomes courageous and, hence, avoiding cliche of competent warrior as opposed to stupid, annoying civilian. Weyland the soldier serving a political part of colony during crisis. (This is a Pournelle theme; however, this part, like so much in novel, is dealt with in passing.) High-tech colonists face primitive dangers and reverting to “primitive” political (Zack — king and warrior-hero) and social (bigamy) forms.

Strung throughout was a biological theme that, more developed, would have made a better novel. Grendels were juxtaposed against humans in a Darwinian struggle for territory and the future of species.

The fate of grendels could have been better detailed. They seemed about to be wiped off Avalon along with the samlon. Also, bit with unknown mainland dangers was a cheap irresolution. [Perhaps this is addressed in the novel’s two sequels.] Grendels are uncooperative, cannibalistic beasts as opposed to social, nurturing humans who conquer an alien planet even after messing up its ecology (as man has always done).

The ecological puzzle was not surprising — many clues were given and it seemed too convenient for all biologists to be damaged by the inventive touch of Hibernation Instability. It would have been nice if Ernest Cohen (who, given inspiration of novel, is an “inside-joke” character) would have lived. If his existence was only for a joke and making Cadmann feel guilty, it wasn’t played well. The serious aspects of his character, piecing together a broken mind to unravel a puzzle was good though.

I liked Pournelle’s depiction of relationship between warrior and others. “Sociobiology” (not a strict definition) is an annoying theme of Niven/Pournelle collaborations and, I would speculate, is mainly attributable to Niven.  [My older self says Pournelle contributed to this theme, and I was wrong about its implausibility. My younger self did not appreciate how deeply human biology and nature, and not nurture and the blank slate, influences the world.] It was especially prevalent here as women instinctively wish for children (unconvincing even if explained) and people mate under stress (convincing and also seen in Lucifer’s Hammer. Perhaps this is Pournelle’s legacy from his professional psych work in “Human Factors” [No, it isn’t. Pournelle seems to have been involved in studying how much heat astronaut trainees could take and how it affected their performance.] Don’t buy all the men being courageous for children, though I did like Caddmann (Pournelle again) explaining reasons for women as mothers, men as warriors roles. However, civilization, he said, changed this and rightly so; yet, things seemed to regress, in extremis, back to that.

In short, an ok book, exciting in parts, but with the potential to have been so much more.

One thought on “The Legacy of Heorot”