There are a lot of reviews of this novel on the internet, but the point of Raw Feeds is that I don’t spend a lot of time putting them up. So you’re on your own finding those reviews.

Steve Sailer’s remembrance for his friend Pournelle does have a bit of commentary on the novel’s possible hidden political symbolism as well as the history of its composition. 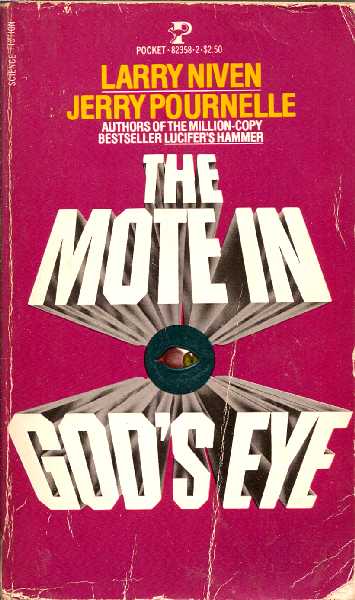 Most of the criticisms I had read of this novel led me to expect a bloated, hoary space opera with a few aliens thrown in all covered with Pournelle’s ostensibly militaristic/fascistic gloss.

I did not find this novel overly long.

It was a relatively quick read and much of the detail was necessary nor is there anything inherently wrong with long books with many characters and subplots (the so-called “best-seller” style of many of Pournelle and Niven’s collaborations).

There have been complaints this novel spent too much time on Navy “space adventures”.

I don’t think so.

Given the universe and the character of the Moties it’s hard to see whom else would contact them. The story, of course, could be constructed otherwise, but it’d be a very different story.

The novel has been characterized as being too chauvinistic towards humans.

One doesn’t need to look beyond the title to refute that argument. The rather simplistic symbolism of the book is as follows: the sun, known as Murcheson’s Eye aka God’s Eye, and its Mote companion is more than just an astronomical alignment. The Mote in God’s Eye is a mote in humanity’s eye as it tries — by bottling up the Moties and with talk of forcing a solution on them — to control a warlike, expanding species, a likable, intelligent but dangerous species.

Man, as the Moties themselves point out, is also warlike and expanding due to population pressures. Senator Benjamin Fowler is a cunning, clever, ruthless, even treasonous, but ultimately principled politician in the style of many other politicians in Pournelle’s works. He tells Dr. Horvarth that he’s leaning towards genocide against the Moties. It has nothing to do with abstract ethics but fulfilling the Imperial mission of protecting humanity.

Fowler refuses to answer a hypothetical from the Moties on whether the humans would accept forced disarmament if the situations were reversed. He admits wiping out Moties would be horrible, even politically impossible, and he plans to provoke an attack by them for justification. He admits humans are guilty of many of the same behaviors. (There are constant references to rebellions and the Secession Wars that plagued the human empire.) But he also knows the Moties threaten humanity. Here the aliens provide a warped mirror to see ourselves.

Yet the Moties are also wonderfully different in their assymetry, their clan system, specialized types (brilliant idiot savants but not as generally versatile individually as humans), their non-standardized technology, their constant resource scavenging. Niven and Pournelle imply much about the Moties and leave the reader to draw many conclusions.

However, the book’s major flaw (by no means a fatal one) lies in the somewhat disjointed conversations in this book. Their meaning and implications are not always obvious.

Perhaps the blame lies with me.  Reviewers usually present themselves as attentive readers unaffected by where they read the book or their state of health and concentration. I read some of this book under difficult circumstances over Christmas at the in-laws’ house. Perhaps I’m just stupid or my concentration was not up to the task.

The part where midshipmen Potter, Whitbread, and Staley land and die on Motie seemed a trifle too lengthy though I liked all the characters and found their death moving and heroic. On the other hand, it was one way to dramatically explicate a lot of information on Motie culture. And it built suspense by revealing the Motie threat to the reader before the Empire was aware of it.

As far as the politics of the novel, it’s obvious — as many have said — they’re Pournelle’s.  Rod Blaine and Sally Fowler are his ideal of aristocrats — privileged but responsible, intelligent, committed to the Empire’s task of protecting humanity. They will do so at physical and psychic risk.

Pournelle doesn’t really reveal explicit details on the structure of government — nor more than he does in King David’s Spaceship — but you can make good guesses. It’s a combination of Roman and British Empires along with elements of American democracy. Pournelle deftly touches on the squabbles and power blocs of Empire.

But its hard to say if this is Pournelle’s ideal of government. He clearly sees much of value in it. But he also see its dangers.

Senator Fowler says an Imperial aristocracy is unlimited in power — in theory — but that in practice, without personal agents with Imperial power (which, evidently, don’t exist), its power is limited.

Blaine has doubts that aristocracy is the way to pick leaders but explicitly realizes rebellious New Chicago’s democracy didn’t do any better.

I’m not sure, especially given his comments in his Imperial Stars anthology series, Pournelle’s an imperialist. I don’t think so. I do think he believes any governmental structure is workable given the right people and any government is ok as long as it provides freedom. We in America are indoctrinated to believe only democracy or — grudgingly now — maybe republics can provide freedom.  We also are deluded into thinking democracies guarantee freedom and security. An empire may very well have an advantage in the latter consideration and be man’s best hope.

I’m not sure of Pournelle’s belief here. I just know he’s skilled at the economic, social, and political vectors and factors of human society.

The novel has a lot of humor. I think one of the best moments is the mission to save a coffeepot — well, serious and humorous.

I liked almost all the characters in this book: the ruthless, loyal, yet fair Admiral Kutuzov; Rod Blaine (here a Pournelle stand-in I’m sure) shows the problems of a commanding officer; the smart, humorous, smart-alec Sailing Master Renner; the midshipmen; the utterly and humorously single-minded astrophysicist Buckman. I liked traitorous, ruthless Trader Bury being blackmailed into becoming a servant of Empire. (It’s an ironic twist that the personal fear of Bury for Moties helps the Empire that Bury is such a problem for.)

I liked the relationship between the Crazy Eddie humans and the charming but fatalistic Moties.

There were two sequels to this novel, one by Jerry Pournelle and Larry Niven, The Gripping Hand, and one by Pournelle’s daughter J. [Jennifer] R., Outies.

2 thoughts on “The Mote in God’s Eye”