The Moorcock series continues with what is sort of the middle book, even though it’s a collection, of the trilogy, the so-called Second Ether Trilogy, that started with Blood. 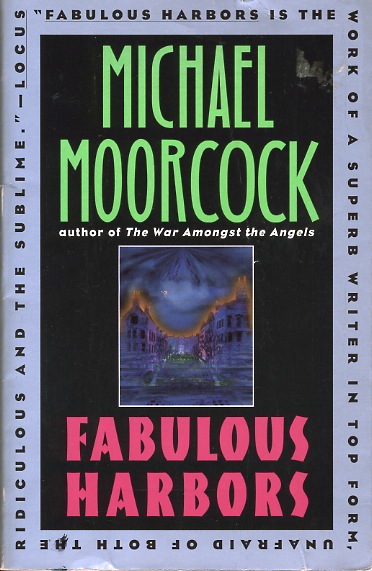 “Introduction” — Mock introduction to the collection. Moorcock claims these stories were related to him by Edwin Begg and that these stories tell of a “slightly better world”. On the other hand, Moorcock, in a serious vein, says our “visions reveal our motives and identities.”

“The Retirement of Jack Karaquazian” — Fragment mentioning, in the title, a character from Moorcock’s Blood. I still don’t really understand Moorcock’s multiverse, but I like it. Many characters with the same name or similar names pop up. They seem to be manifestations of the same personality across the multiverse or, sometimes, the same character. Of course, the balance between Law and Chaos – not to be confused with good and evil, is of paramount importance. I’m not sure how the Holy Grail and the Bek’s, particularly Rose von Bek, figure in all this. The multiverse also seems to operate on many different scales of time and space. This story mentions the “Masked Buckaroo” which Moorcock has written of elsewhere as well as his creator.

“The White Pirate” — An entertaining, playful fantasy that does a twist on the Wandering Jew tale. Moorcock gives us the Wandering Gentile, unjustly cursed by Christ and an immortal wanderer about the Earth, a miserable man with a tinge of Hitler about Him. (His name is Manfred von Bek and, at one point, he says “Mein Kampf! Mein Kampf!”). Only finding the Wandering Jew can remove the curse. Finally, after a 2,000 year search, he finds him – and he’s infuriated. The Wandering Jew, sensibly, has made the best of his lot (as he remarks being cursed with immortal life’s not a bad thing). He leads a rich, rewarding life of study, surrounded by riches and adoring families and friends. The Wandering Gentile can’t accept he’s wasted so much of his life on despair and bitterness, and he strikes off again. Moorcock even works in a bit of an attack on the idea of political ideologies.

“Some Fragments Found in the Effects of Mr. Sam Oakenhurst” — Fragments of pulp magazine writing by Oakenhurst. They detail adventures in the Second Ether of Moorcock’s Blood and his Multiverse comic books. Moorcock exhibits a great talent for evoking mood by using strange words or familiar words in an odd context.

“The Black Blade’s Summoning” — It was nice, after many years, to read another Elric of Melniboné story – the series that introduced me to Moorcock years ago. This is something of an important story in the multiverse mythos as befits another tale where Elric travels to a dimension other than his native world. It explains the origins of Cor, at least, seems to – nothing is ever clear cut in Moorcock’s multiverse and Rose von Bek as the young survivor of a world ruined by the baleful influence of cast down angels of Chaos. She will go to settle a galaxy “whose planets form one mighty garden”. The mysterious Captain Quelch, who appears in the Multiverse comics and Moorcock’s Blood shows up here as a sort of Western hero packing a Smith & Wesson revolver. He seems to be an agent of law. Count Renark von Bek of Moorcock’s The Sundered Worlds (at least one version of Renark von Bek) appears. He tells Elric that he is an unconscious and intuitive player in the Game of Time. Elric’s people were allied with the Chaos Lords, but his longing for Law frequently makes him an agent for balance. Renark also introduces Elric to the “moonbeam” roads (some of which appear as the Grail) that link different dimensions, dimensions existing in different scales of space and time. (Moorcock has said that the graphic depictions of Chaos in the fractal pictures of Mandelbrot sets are the visual analogy to the dimensions of time and space in his multiverse – similar but not identical on various scales.) Elric resists von Bek’s offer to become a conscious “jugador” in the Game of Time even after seeing a glimpse of the true nature of the multiverse.

“Lunching with the Antichrist” — While I appreciated Moorcock’s skill in creating the history, architecture, and denizens of Sporting Club Square (which may not be that much of an invention – I don’t know that much about London), I didn’t find this story all that interesting, and it was too long. The story concerns Edwin Begg, the Clapham Antichrist (a good character), and his lost love, Rose. This is more obviously political than many of Moorcock’s works, but I wonder how Moorcock’s peculiar mixture of anarchy and authoritarianism (I recall reading he agrees with Andrea Dworkin’s anti-porn views and, presumably, her views on legally suppressing it) leads him to view ideologies of all sorts as evil and bankrupt.

“The Affair of the Seven Virgins” — An imitation Sherlock Holmes story with Sexton Begg (listed as “metatemporal detective” in Michael Moorcock’s Multiverse comic) and Count Zenith (also in the comic). It was an entertaining tale of magic, revenge, skullduggery, and Middle European fascism in the country of Walderstein (the home of the Grail-guarding von Beks who are cousins to the Beggs). The story seems to take place in the late ‘30s in our world (or, of course, it could be one very similar). Zenith is an Elric-like figure (and, in fact, seems to be a Bek) who appears to be aligned with Chaos or, as per the Beks, works for a reconciliation between Satan and God. The mysterious Captain Quelch shows up here as a mercenary scoundrel and con man. A fun story.

“Crimson Eyes” — This story was adapted in the first issue of Michael Moorcock’s Multiverse. It features Sexton Begg, “metatemporal detective,” and Count Zenith, aka Count Ulrich von Bek. Bek undertakes a series of vigilante killings against financial and governmental types using the Grail for financial gain (selling its healing and resurrection powers). The story element that puzzles me is that it takes place, seemingly, in a Thatcherite Britain of the late ‘80s or early 90s. However, Sexton Begg seems little changed from his character in the much earlier “The Affair of the Seven Virgins” which seems to take place in the late 30s. However, continuity is very hard to arrive at in Moorcock’s Multiverse.

“No Ordinary Christian” — An entertaining tale of a Prince Ulrich von Bek aka Al Rik’h (obviously Moorcock’s playfully combining two manifestations of his Eternal Champion – the protagonist even looks like the albino Elric) who flees from the temptation of an adulterous affair. He encounters a young Poppy Begg. He takes her to his desert refuge where the ruins of a long forgotten monotheistic sect worshipping the Egyptian god Aton exist. In her dreams, Begg makes contact, seemingly, with the almost forgotten Egyptian pantheon and her interest brings them to life. Eventually, she has all sorts of congress with the old gods.

“The Enigma Windows” — I’ve never read any stories or novels featuring Jerry Cornelius, so I couldn’t appreciate the family dynamics here and don’t even know if Cornelius is identical to the Cornelinses of other stories. A

new, primitive spirit … life .. simpler now that it was fully privatized … Law maintained by the tribal  feud or … blood-money

is afoot after Cornelius awakes (Moorcock is definitely  not a libertarian). He heads for a “happier century.”

“Epilogue: The Birds of the Moon” — Apart from a witty introduction involving a bizarre description of birds migrating to the moon from James Audubon’s (another example of Moorcock using the totemic and iconic power of familiar names for unfamiliar ends) 1926 book The Birds of the Moon. This is a pretty standard story of a man losing his family to another dimension (actually, the whole multiverse here) after they accidentally cross over into a parallel world where the Grail shows them a vision of the multiverse. Still, it was interesting.