This week’s Deep Ones discussion was a story late in the career of Arthur Machen. 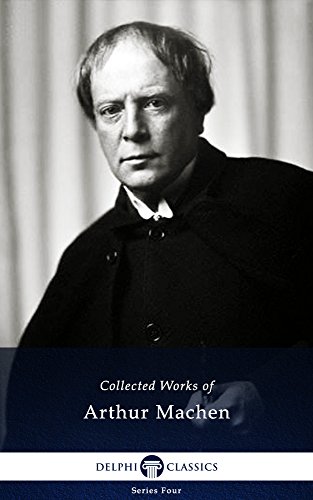 This story wanders about the pubs and taverns, churches and apartments of London past and present to an indefinite conclusion. Like “The Great God Pan”, the reader is mostly expected to deduce the relevance of those events though the character Arthur does some of that work.

Despite that inconclusiveness, I liked this tale.

The story starts with three men – “the youngest of the three, a lad of fifty-five or so” – who spend their leisure hours “recalling many London vicissitudes”, a combination of nostalgia and amateur history. Their conversations cover the wax fruit they’d seen in the storefronts of the past, paintings, old stores and buildings, remembered waiters serving long ago in restaurants, and the depiction of the Iron Duke on tobacco tins.

One night, they all realize they really haven’t ventured very far into certain parts of the city, particularly North London. One, Harliss, that “lad”, mentions he grew up in Stoke Newington in North London.

Another of the three, Perrott, remembers a Poe enthusiast he met who was keen on exploring that part of the city since Poe went to school there during his youth. Perrott also had a cousin he met, after not seeing him for many years, who told him with surprise of a very beautiful place, Canon’s Park, in Stoke Newington. Harliss is surprised to hear this. He knows the area well having lived there the first 16 years of his life. There is a Canon’s Park there, but it’s hardly beautiful and never was.

It certainly never had the garden that Perrott’s cousin described. The three put aside the matter to discuss plays put on in theaters “pulled down for thirty-five years or more”. However, the other member of the trio, Arnold, keeps thinking about the matter.

In his library, he picks up A London Walk:  Meditations in the Streets of the Metropolis by Rev. Thomas Hampole. It’s a fictious work, but its descriptions typify Machen’s “psychogeography”, the meditations caused by the urban landscape of London.

Hampole tells a curious story. While filling in temporarily at a vicarage in Stoke Newington, he meets the curious Mr. Glanville. He has the notion that, before the Fall of Man, humans had access to the “Heavenly Chaos”, a

soft and ductile substance, which could be moulded by the imagination of uncorrupted man into whatever forms he chose it to assume.

One day, before he leaves the vicarage, Hampole visits Glanville’s apartment. Glanville bids him to look out his window and see an extraordinary sight. Hampole sees nothing unexpected. Then Glanville taps him on the shoulder, and Hampole sees a beautiful garden. Leaving the apartment, Hampole does not see the garden outside. Arnold makes the link between what Perrott’s cousin saw and Hampole’s account.

He goes to Stoke Newington. Canon’s Park is as Harliss described, and the whole neighborhood has seen better days with modern flats being put up and mansions converted to apartments. He ingratiates himself with a nightly gathering of old timers in the neighborhood. He then hears that Canon’s Park had something of a bad reputation. Why? Stories abound. An executed murderer buried at a crossroads? A fever? But another of the old timers explains it was because there was an insane asylum there, the Himalaya House.

One of its inmates escaped and rented a room in a nearby lodging house. A quite man passing himself off as a student, he talks to the landlady about the beautiful view outside of his window.  He invites her to look, but she finds him too weird and just leaves though, that night, she hears “jabbering” in a foreign language and English, a conversation that sounded like he was “talking to a young lady, and making use of a very affectionate language”. Soon after that, the man, Mr. Wilson, is taken away.

The story ends with the opening trio reassembled and Arnold telling them of his findings. Harliss is disbelieving. Perrott puts the similarities between his cousin’s story, Hampole’s story, and the affair of Mr. Wilson down to coincidence. Then Arnold reveals a final oddity.

When he went to Stoke Newington one night to look for that “singular park”, he encountered a young man who had lost his way, and had lost — as he said — the one who lived in the white house on the hill.

“And I am not going to tell you about her, or her house, or her enchanted gardens. But I am sure that the young man was lost also — and for ever.”

The implication is that Mr. Wilson may have been that young man. Another possibility is that the young man is not even from our world.

Arnold concludes the story with:

“I believe that there is a perichoresis, an interpenetration. It is possible, indeed, that we three are now sitting among desolate rocks, by bitter streams…And with what companions?”

The impossible vision outside a city window reminds one of H. P. Lovecraft’s earlier “He”, of course. But Lovecraft’s vision was of terrors past and future. Machen’s is of a beautiful ideal that never existed and never will – except, possibly, when created by an act of will by a person uncorrupted.

If so, why is Mr. Wilson one of the uncorrupted? By virtue of being insane – though there is a hint that not all of the Himalaya House’s residents were justly considered mad?

Our world may “interpenetrate” with another world.

But, for me, the story’s ending intrigues after pondering the not obvious conclusions.

Are the trio of Harliss, Perrott, and Arnold, with their endless discussions about the sights and sounds of the past just corrupted men who can not recreate the world they want and lost?

A story of peregrinations in time and space and maybe other dimensions and also an evocation for a London Machen knew and was passing.

A fine example of weird fiction evoking a presence beyond the veil of our normal senses. Here it is not a malevolent presence but something we desire and cannot have. The Fall of Man, here, gave us the despairing knowledge that we live in a world of change brought on by human corruption and fallibility. It is tenuous in its permanence yet adamantine in its “desolate rocks” and “bitter streams”.