This one makes a nice companion to the last post on David Hambling’s Swarm Troopers though it’s not as tightly written.

Review: Eyes in the Sky: The Secret Rise of Gorgon Stare and How It Will Watch Us All, Arthur Holland Michel, 2019. 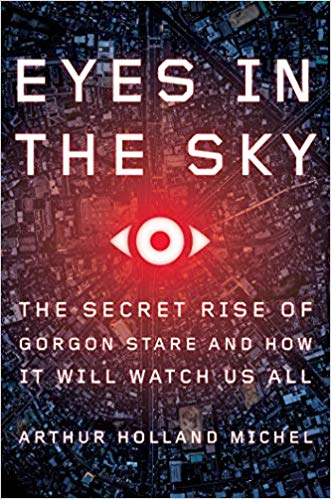 Imagine above you is a camera. It can survey tens of miles at a time yet take in enough detail to read license plates and distinguish faces. It records all it sees. It’s a spy TiVo.

If you’re a terrorist, it knows where you are, where you’ve been, whom you’ve met.

If you’re a politician with an embarrassing secret, bribes or some sexual picadillo, it knows where you’ve been and whom you met.

If you shot a drug dealer on a street corner, it saw you and the past movements of the dealer.

If you’re a plumber not paying your taxes, it can track your service calls in real time and perhaps the tax authorities can serve a levy on your customers or do an audit.

If you’re a child snatched and put in a van, it knows the license plate number of your abductor.

If you’re on a rooftop after a hurricane, it can help rescue you.

If you eschew electronic communication with your fellow political dissidents, it can follow you to an in-person meeting with them.

You don’t have to imagine this camera. It exists already. It’s been built and used for some of the above purposes. It could be used for all of them.

Gorgon Stare, the official U.S. government’s name for this technology even though mentioning it often brings discussion to an end when Michel mentions it to public officials, was born of America’s neo-Jacobin adventures into the Middle East. In 2004, the U.S. military wanted a way of stopping casualties from Improvised Explosive Devices in Iraq. It not only wanted to stop the bombs from being planted. It wanted to destroy the networks planting them. It wanted to record everything on the battlefield.

Fortunately, scientists at the Lawrence Livermore Laboratory had been considering the problem since 1998.

That was the year the film Enemy of the State came out, a film that amusingly gets referenced by many of the engineers and deployers of Gorgon Stare. The film, is of course, about the National Security Agency conducting rogue operations and assassination in the United States. To Gorgon’s Stares developers and initial users, it inspired them to get an answer on how to keep American soldiers safe.

Fusion is a major theme of the book, fusion of methods and technology.

The entertainment complex of Hollywood, video games, and sports all proved useful to developing Gorgon Stare. One of the cameramen who worked on Enemy of the State provided technical support in developing the cameras. The high-end video chips used by gamers were deployed in mass arrays to process Gorgon Stare’s video. ESPN’s system of tagging archival footage to be retrieved quickly proved useful to analysts.

You don’t need a single large camera for Gorgon Stare. Several cameras can be used in an array. Single panoramic shots from one camera can be stitched together with those from others. The camera can be stabilized, geographic features pinned in place to highlight the important subject: people.

Automation software has been developed to note, not always accurately, anomalies of activity. Facial recognition software – and a huge reservoir of photos exists for use from mug shots and passport photos to all those photos we helpfully uploaded to the Internet, GPS info from smartphones, and social media postings can all be tied to that “person of interest” meeting someone in the parking lot.

Michel’s account is focused on the people involved in all this. A purely technical description of Gorgon Stare’s development would have been a shorter book.

But Michel’s real aim is to get American’s to regulate the use of this technology. He relates the arguments about its secret deployment over Baltimore. Citizens of Miami, Florida and Dayton, Ohio scuttled plans to use it over their heads.

Its this part of this book, the final third, where Michel goes a bit off the rails.

In America, air space is considered public space. If you’ve got a camera in the sky, you can use. (Even the NSA couldn’t stop a camera crew for Enemy of the State from doing aerial shots of its headquarters.) Western law and ideas of freedom were built, implicitly, on ideas of inefficiency and ignorance, but they are not inherently based on the authorities having to blind themselves and ignore law violations. Why shouldn’t traffic violators and tax cheats and medical insurance fraudsters be detected when they operate in public under the Gorgon Stare?

On the other hand, there is no reason to think increased surveillance will make life safer. One only has to look at the anarchotyranny of modern Britain where London’s crime rate has risen and police spend their time hassling people for their Twitter messages.

There is also the historical bias of the whole project. Will increased surveillance do much more than make a police department your friendly neighborhood historical society there to precisely record the details of a crime after the victim is dead on the sidewalk? Did Baltimore’s surveillance program result in more apprehensions and convictions? (In America, jury nullification by resentful minorities is always a possibility.) To be fair, Gorgon Stare’s advocate for police work can argue they may get repeat offenders off the street or deter crime. Michel definitely lets them have their say about this.

Given American’s pathetic immigration enforcement what good does airborne surveillance of the border do if the apprehended are then released never to show up for their appointed court date?

Michel seems to adopt the modern stance of not noticing real things like the disproportionate amount of crime committed by blacks or terrorism by Muslims. He has an implicit horror that increased surveillance of some groups may be justified. The counter argument is, of course, who gets to decide what groups deserve that and why.

Michel goes into how the “anomalies” that bring police attention to subjects may be innocent activity and how facial recognition works best on whites. Those seem problems that will be fixed through machine learning.

There’s also a sense that Gorgon Stare is another bandaid for problems we won’t face and solve directly. If we let fewer immigrants into America, we wouldn’t have to surveil “extremists” (and everyone else because we refuse to profile). If we, perhaps, had better forestry management, we wouldn’t have to watch out for massive wildfires as much (the Forest Service has used Gorgon Stare).

Michel recommends a series of laws: public consent to Gorgon Stare being used by its surveilled citizens, deletion of the archive after a certain time limit (though there is a potential loophole if the law excludes material from “active investigations”), anonymizing people’s identity and unmasking them only after a search warrant, and auditing access to the files.

It all sounds good until you remember the recent abuses of unmasking and bogus surveillance warrants uncovered in the recent “Russiagate” matter. Auditing access is similar to the “anti-browsing” policies of America’s tax authorities. People still violate those policies though they are often caught and punished.

Gorgon Stare and its descendants are still in use though some of the contractors who wish to deploy them don’t have a lot of customers. Others do, private customers like insurance companies they won’t reveal.

Gorgon Stare is traditionally deployed on helicopters and planes. Michel talks about plans to deploy it using small cubesats. Oddly, since he’s affiliated with the Center for the Study of the Drone, he only spends a couple of pages talking about mosaic surveillance using a swarm of small drones, a possibility brought up in David Hambling’s Swarm Troopers.

It’s not a concisely written book and wanders a bit in the final third though that’s its most important part, but it’s worth looking at for another manifestation of the Surveillance State aborning even in the “free” countries of the world.