Review: The Spy Who Changed History: The Untold History of How the Soviet Union Stole America’s Top Secret, Svetlana Lokhova, 2019. 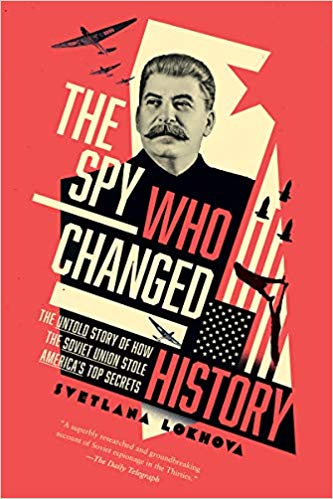 I’m pretty sure that most biographers of spies think their book should be titled “the spy who changed history”, but Lokhova actually justifies her title.

Using archival information from the NKVD archives she came across in a previous history about Stalin’s Great Purge, she gives us the story of Stanislav Shumovsky the man who could be said to have made the Cold War possible.

How? Because Shumovsky was not only involved in stealing the secrets of America’s atom bomb but, perhaps more importantly, the means of delivering it – stolen American aviation technology that resulted in the Soviet Union’s Tu-4, its first strategic, transcontinental bomber that could nuke America.

Shumovsky was the first of the USSR’s very useful scientist spies, agents who not only knew the usual tradecraft but who also had the scientific expertise to know what to seek out on their own initiative, how to chat up loose-lipped scientists and engineers who were happy to talk to a fellow colleague, and how to use the gained secrets to develop Soviet technology.

Born in 1902, Shumovksy was wounded three times in the Russian Civil War where he was an enthusiastic supporter of the Reds. In 1924, he finally got a chance to realize an old dream of becoming a pilot though a crash permanently injured him so he had to give up flying.

When Stalin’s Five-Year Plan for Soviet modernization was launched in 1928, Shumovsky was to benefit from its goal of educating, up to western standards, the country’s best and brightest. Shumovsky, already having served as an army commander, financial investigator for military affair, and at posting to the electro-mining school for the Baltic fleet, was sent to study aeronautical engineering under Andrey Tupolov, the country’s foremast aircraft designer.

Before “Iron Felix” Dzerzhinsky died in 1926, he and Stalin had talked about the importance of scientific and technological espionage in developing the country’s self-sufficiency in weapon development and production. Paging through American Richard Wilmar Rowan’s Spy and Counterspy: The Development of Modern Espionage from 1929, Stalin was taken with how espionage could help the USSR modernize on the cheap. (Lokohva claims that Stalin learned how to run intelligence operations from this book which seems rather astonishing given his past as a revolutionary and political operator, but, evidently, we have Stalin’s copy of the book with his notes.)

Stalin and the NKVD would simply send a bunch of Russians to study at America’s premier institute of aviation engineering, the Massachusetts Institute of Technology. And, in 1931, that’s just what happened. Sixty-five Russians were enrolled there. Shumovsky was the leader of these spies, and none stayed in America as long as him. Shumovsky’s closest friend in the group was mechanical engineer Ivan Trashutin. “Ivan Diesel”, as the Germans grudgingly dubbed him, probably did the most of any of the group to win World War Two for the Soviets since it was the engines he designed that powered Soviet tanks.

The next three years were busy for Shumovsky. He didn’t just polish his English and his presentation to Americans and complete his master’s degree in aeronautical engineering. He made numerous contacts for the future, spotted agents for the NKVD to recruit, and hunted up technical papers in the MIT library.

The 1930s were a good time to be a Soviet spy in America. The FBI was oblivious to industrial espionage, concentrating instead on the Communist Party of the USA. MIT was desperate for tuition money given the declining enrollment in the Great Depression. There was a crisis of faith in capitalism so ideological recruitment of agents, always the NKVD’s preferred – and cheapest – method to get secrets. As a data point in the link between Jews and communist subversion, Lokhova notes that, while the majority of second-generation Jewish immigrants to America were not spies, “without them, Soviet espionage would not have been able to function in the US in the 1930s and 1940s.”

American companies, particularly aviation companies, were desperate for cash. The American capitalists of the 1930s may not exactly been willing to sell the rope to hang themselves, but they did offer installment plans and options to set up rope-making factories and licensing of patents on ropes.

In fact, the Soviets were not just interested in technology. They wanted to learn and perfect the production techniques of the man they regarded as the greatest American, Henry Ford.

The amount of technical aid American companies offered Russian in the 1930s and the number of technical specialists and general workers who willingly moved to Russia was a story known to me in general outlines, but this book fleshes out a lot of the details.

Shumovksy, “a nice fellow to talk to”, didn’t make a secret of his activities. He chatted people up. He took movies of production floors. When the Soviets set a record with a transpolar flight from Moscow to San Francisco in 1937, it was Shumovksy that publicized it. (He even got to meet Shirley Temple on the publicity tour as documented in one of the book’s many photos.)

In 1934, Gaik Ovakimian, dubbed the “wily Armenian” by the FBI, a doctor of chemical engineering, arrived in New York City to take over the NVKD’s network of legal agents in America as well as the illegals that Shumovsky had been running. Shumovsky became a legal agent operating in AMTORG, the trade organization that coordinated business between the US and USSR. He toured plants, research facilities, suppliers, and government facilities. Tupolev even came to America and joined him on some of these trips. They were openly expressing an interest in buying American technology. They stole far more than they bought, though.

The path Shumovsky blazed was followed in 1938 by Semyon Semyonov, the man who would go on to run ENORMOZ, the operation that stole the secrets of the Manhattan Project. Semyonov ran at least twenty agents in America in that operation.

This industrial espionage did not go unnoticed. As early as 1934, people at Douglas factories were wary of Russians at their factories. A Vultee engineer at the company’s aircraft plant in Russia noted the presence of stolen American blueprints. George Keenan, then at diplomat in Moscow and future author of America’s containment policy against the Soviets in the Cold War, urged that only obsolete technology be sold to the Russians. But Americans wanted money and the only country, at that time, they regarded as a threat was Japan.

Things did not always go well for Soviet intelligence in America during this period of time. America became more security conscious starting in 1938 as Nazi power and espionage in America increased. Some American communists were upset that the USSR had officially turned its back on world revolution with its “socialism in one country” stance, and that affected recruitment. The split in communism between Stalin and Trotsky eventually caused enough chaos and suspicion that Shumovsky was recalled to Russia in 1939.

When he returned in October 1941, after a harrowing trans-Atlantic crossing, he became involved in procuring weapons for the USSR. Naturally, that included access to a lot of defense secrets. He returned to the Soviet Union for good in 1943, and, by that time, the Americans were becoming concerned about Soviet espionage in their country though it wasn’t until the 1970s the CIA tumbled to the importance of universities in foreign powers obtaining critical intelligence.

Lokhova does a lot of peregrinations in her story, usually starting out with a dramatic incident and then telling you how it came about. You could argue that it wasn’t Shumovsky that ran ENORMOZ, so he didn’t “change history” the way she says. But I think her point is well taken that Shumovsky’s brilliance and success paved the way for Semyonov.

A lot of this book doesn’t directly involve Shumovsky but others. Two are Rae Bennet and Gertrude Klivans, two American women from Russian-Jewish families who were instrumental in getting NKVD recruits up to snuff in their language skills and cultural presentations for work in America. We hear a lot about Bennet especially. Lokhova tries to make us feel sorry for her, but it’s hard. Bennet seems a woman unrealistically obsessed with earthly justice who flew too close to the sun in her utopian beliefs and crashed to earth to land in an unmarked grave in the Great Purge. Allegedly, she was involved in a Trotskyite plot to assassinate Stalin.

And, while I appreciate Lokhova’s presentation of her story in terms of Soviet patriotism and the country’s attempt to modernize itself, I’m not going to excuse Stalin’s actions as purely defensive and done to insure Russia suffered no more humiliations, not given Soviet attempts to take over parts of Europe immediately after World War One.

This book could have used another pass by the editor. There are repetitions. Bennett’s story is partially recounted in both the preface and main text. News of how long the search for the survivors of a failed Soviet transpolar flight is not in the main chapter on “Stalin’s Falcons”. There are non-sequiters in a couple of places. While Lokhova avoids each chapter being a monograph of its own like some books from academic presses, she should have worked to present her tail more chronologically. Finally, while this book has an extensive index, there are no separate listings for CODENAMES.

With those reservations, it still is a worthwhile for its look at Soviet industrial espionage in the 1930s and 1940s.

And if all this looting of defense technology by a potential future adversary sounds familiar, why, yes, Lokhova does mention, in the preface, current Chinese activities in America.

More reviews of books are indexed on the espionage page.