This week’s topic of Deep Ones discussion over at LibraryThing. 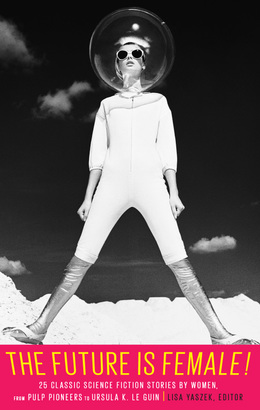 This story is nominally sf. It was first published in The Magazine of Fantasy & Science Fiction. Besides the main technology enabling a “New You”, there is a reference to an autochef. But it is appropriately weird too. The author of last week’s weird tale, John Keir Cross, seems to have had a philosophy that it is not events, per se, that makes a weird tale. It is human behavior.

This story has both kinds of weirdness. Essentially, it’s a doppelganger story with some odd behavior by its doubled character.

We start out with our heroine Martha. Martha is dissatisfied with her figure and weight and answers an ad promising a “New You” in “one of the glossier fashion magazines”. It promises you will “Watch the Old You Melt Away”.

And Martha would like the old her to melt away. She’s 40 pounds heavier and six inches shorter than the woman, whom she calls Marnie, she’d like to be.

She hems and haws and consults with her inner Marnie. After cashing out $3,000 worth of stock in her husband Howard’s business that he gave her as a wedding gift, she places her order.

And the crate arrives. Naturally, in a story such as this, she ignores the warning to read the instruction manual first and dives in. She touches what seems to be a figure of the woman she would like to be, and the change is effected in somewhat vague prose.

Marnie is born in the flesh.

Marnie locks Martha in a closet before her husband Howard comes home.

For a while, the dream of Marnie is reified. The desired effects happen. She and Howard are invited to more parties. His business thrives with the charming Marnie by his side. And, taking advice of glamour magazines that a well-dressed man is an important fashion accessory, Howard gets a new wardrobe.

But Howard begins to put on weight and odd messes occur about the house.

Finally getting back to cleaning after several days, Marnie opens the closet to find an even heavier Martha, marshmallow bag in hand, in the closet. Martha reminds Marnie that she has a key to the closet too and had to eat. An arrangement is made where Martha serves as a frumpy maid about the house. Marnie notices Martha feeding Howard chocolate cake secretly – thus explaining his worsening appearance. (Howard is remarkably nonplussed by the whole thing.)

Marnie decides to get rid of Martha. She reads up on poison and gets a Dispose-All. Martha knows what Marnie’s up to and points to the relevant section in the New You Instruction Manual that says killing Martha would kill Marnie. Eventually, Marnie pays Martha to go away to another city.

However, Marnie notices that at the parties, where handsome young men swarm around her, she is rarely by Howard. She eventually learns he’s actively avoiding her. And she learns that he has secretly been meeting up with Martha. And Martha begins showing up at the same parties and social organizations Marnie has entry to now. And Martha’s popular despite being even more fat than when Marnie was born. Marnie even sees Martha when she goes clothes shopping.

One day, Howard announces he wants a divorce. There is someone else, he says, the “girl I married”, Martha.

Martha and Marnie hatch a plan. Martha sends for a New You for Howard, and he undergoes the same quick transformation and doubling that Martha/Marnie did.

And then the new and improved Howard runs away with Martha instead of staying with Marnie.

The story ends with the old Howard on the floor after his “transformation”:

‘Oh get up’, she said, and poked it with her toe. She was completely composed now. ‘Get up—darling,’ she spat.

What are we to make of the end and Marnie?

An obvious interpretation of the story is that Martha, pre-New You Marnie, could have been just as popular socially as Marnie. The personality, wit, and knowledge were all there before the New You model. And Howard loves Martha more than Marnie. That, however, is not entirely consistent with the success her appearance brings Howard’s business or the number of young men that flock about Marnie.

Yet, there does seem to be an innate shallowness in Martha and her transformed version of Marnie. She puts too much stock in appearances. When her appearance is improved, she regards Howard as a fashion accessory. That is mirrored in Martha wanting the improved Howard – though it’s also contradicted by her feeding and hanging out with the old Howard. However, with Marnie’s connivance, Martha has the opportunity to give expression to her desires.

Perhaps her new beauty has caused Marnie to be more assertive and stronger.