Since I mentioned Ann K. Schwader’s poetry in the last post, I thought I’d post this Retro Review that first appeared on the Innsmouth Free Press site in 2012. 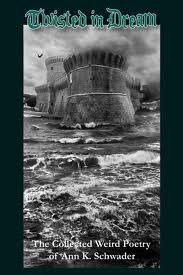 Yes, I’m talking about poetry. Don’t roll your eyes and click on the next page.

This isn’t that kind of poetry, no odd-looking bits of text that seem to be mumbling something behind a screen of obscure language and esoteric allusions. I assure you this isn’t like that stuff your old English teacher made you read. There may be sonnets here, but it isn’t Shakespeare. The closest you’re going to get to that is “Ophelia’s Moon” and, when Schwader does Hamlet, Dad’s shade isn’t the Prince’s only ghost problem.

Those of you who think you don’t like poetry just haven’t seen the good stuff. And, if you like horror and weird fiction, this is the good stuff. It has the three things I look for in poetry of any sort: adherence to a form, condensed-but-comprehensible language, and memorable images.

Consider “In the Yaddith Time”. It’s actually 36 sonnets, 24 pages long in all and sort of a mini-epic. A human expedition finds a dimensional gateway on Mars. Madness and death await beyond. Schwader’s verse – technically, Petrarchan sonnets, I believe – pulls you through a story so fast you forget you are reading poetry. And, sometimes, she expands the narrative vista with sonnets assuming the viewpoint, not of humans, but the entities they encounter. This may have been inspired by Lovecraft’s own sonnet cycle, Fungi from Yuggoth, but it’s a tighter story, a throwback to the days when poets were household names and wrote ballads and epics in the millions. (I’m referring to the morbid state of English language poetry today. I understand that verse has retained its vitality and popularity in some other languages.)

If you think you don’t like poetry, let “In the Yaddith Time” be your gateway to something new.
If you’re already willing to consider weird poetry, Schwader doesn’t disappoint. Schwader is a better poet than Lovecraft, her model for much here. While Lovecraft was certainly technically proficient, his poetry was usually lifeless. When he abandoned his rhymed couplets commemorating birthdays and seasons to attack an amateur journalism colleague, or parodied T. S. Eliot’s “The Waste Land” with “Waste Paper”, or spoke of old Providence warehouses or wrote sonnets, his poetry came to life.
Clark Ashton Smith is the comparable poet that comes to mind. (Robert Price’s foreword mentions Richard L. Tierney, but I admit unfamiliarity with his verse.) Smith’s word hoard is filled with gems and semi-precious stones and shiny metals. His pictures of the macabre and decadent are in a mosaic of rare, unusual words. Schwader’s poetry is like marquetry. As wood is more common than jewels, so Schwader’s word choices are more common, but the patterns she makes, the pictures she composes are still as intricate and striking as Smith’s.

And both poets have a mastery of traditional forms, though Schwader seems to have a higher proportion of blank and free verse than Smith.

In the first seven sections of this collection, Schwader basically does variations on Lovecraftian themes and images. To me, these sections show her greatest skill. Let’s face it: The truth is that, while we may adore Lovecraftian themes and cosmic horror, there just aren’t that many themes in H.P.’s work: acquiring knowledge can lead to horrible understanding, the inexorable call of heredity, and the insignificance of all of human life and human past in the face of the cosmos. Schwader gets 150 pages of poems out of these themes, 146 poems in all, with little sense of repetition in her languages or images.
She uses the great strength – indeed, I would call it almost a requirement – of good poetry: condensed language. She does not give us banal prose typed funny. The “Ancients and Acolytes” section comments on the writers and stories associated with the Lovecraft Circle, including Clark Ashton Smith, Robert Bloch and Frank Belknap Long. Five other sections of the collection distill the essence of Lovecraft’s fiction to extrapolate their plots or provide a parallax view of events and characters. The specific Lovecraft stories treated are “The Shadow Over Innsmouth”, “The Case of Charles Dexter Ward”, “The Dunwich Horror”, and “Pickman’s Model”.

The sonnet is Schwader’s seemingly preferred form, but she does well with others. There is “Asylum Sestina”, which violates advice I’ve heard offered poets attempting a sestina: Carefully choose the six words the poem is built around so they can do double duty as, say, noun and verb or adjective and verb. Schwader throws that advice out by using “R’lyeh” and “Cthulhu”. But it works. I spotted some villanelles, too. I was glad to see little haiku – a form I don’t think works in English. (Definitely a minority view on my part.) The forms of other poems escape me, but some are built of sestets with the longest being the 180-line, “The Coming of Ammutseba”.

Schwader avoids the overly plentiful puns some poets of the fantastic are given to. When she uses them, they actually do work and not as low comedy. My favourite example is “Auld Leng Sign”.
This is a collection of weird poetry, not speculative poetry or science fiction poetry, so there are few scientific or technological metaphors. Science, though, is not entirely absent. In addition to astronomy, many poems reference archaeology, not only Egyptian – a subject that fascinated Lovecraft – but of the Ancient Americas, as well.

For those already fans of Schwader’s poems, I have to admit, with chagrin, I am a latecomer to her work. I hadn’t even heard of her until last year and first read her fiction, not her poetry. I did manage to find a copy of her The Worms Remember. However, this collection incorporates all of that book, plus the independently released sonnet collection of In the Yaddith Time.

In the “Private Shadows” section, Schwader diverges from her usual forms and Lovecraftian themes to take up new concerns: serial killers past and present, touring modern Egypt, the death of faith, grieving the death of loved ones, Poe (the effective “Waiting for Angels”, with the poet in death’s vestibule, or a Virginia Poe’s view of their marriage in “Maiden & Raven”), and history – including, seemingly, a poem about Hitler’s death, “Eminence Grise”. Another thematic grouping is aptly summed up with the title, “Death Envy”. Sometimes, she groups poems together to highlight these thematic variations. This section’s experiments in verse forms generally work except, to my mind, a form mixing traditional prose paragraphs with three-line, free verse stanzas. They usually deal with Ancient American cultures and images.

Throughout the book are black-and-white drawings from artist Steven Lines. While a couple were a bit cartoonish in the style of bad magazine illustrations, most effectively conveyed menace probable or alien.
It was rare that any of these poems failed to meet one of my three requirements and, often, they met all three. That makes Schwader an exceptional poet. I hope, with this book, an old tradition is stubbornly and unquietly stirring to life.

You can buy Twisted in Dream: The Collected Weird Poetry of Ann K. Schwader from Hippocampus Press.