It’s an interesting theme, one I always intended to read more of.

So, since I’m still working on new reviews, you get this.

Up until the last six paragraphs, I was impressed by how much Robinson got away with in this book.

He gives us 408 pages of little physical action or violence bolstered with off the shelf sf elements of dubious plausibility:  shadowscreens whose operation is unclear as is how the falsies (virtual reality projections filtered out — not created — by eye masks) work; a centuries old scheme to breed traits of empathy, sensitivity, and nonviolence into a “new” crew (deliberate breeding for personality traits seems barely plausible) [29 years later, I don’t find either of those things improbable]; an obsessed captain whose personality is locked by millennia old “conditioning” (always a pulp favorite — I remember one review of this book emphasizing Robinson’s love of pulp sf and how it show up here); computers that require great manual dexterity to use effectively.

Yet, it moves, it’s thrilling.

The book reminded me, with its central character of Captain Michael Kusaka, of Jack London’s The Sea Wolf or Herman Melville’s Moby Dick with their mad, obsessed, sometimes violent captains.

The starship venturing for axons also reminded me of Poul Anderson’s Tau Zero.

Robinson gives us a story relying on the quirks and interactions of personalities played (an interesting part is how the recombination of genes through the centuries produces, for Sparrow/Raymond Stone, an echo of previous crew members he’s known) played out (with the case of Stone, Kurasaka, and Thrush) over centuries, long term conspiracies of eugenics and mutiny, the loveliness of being the sole spark of life in the universe, a plausible ship’s culture (lots of sex in this book but it’s not graphic, contrived, or unnecessary), a starship never intended to voyage for longer than 80 years (40 out, 40 back), an Earth vacant of man (very probably, not definitely), the relations of a near immortal to the crew “mayflies”, Sparrow’s discovery of his past lives, constant revelations of intrigue, obsession, and personality.

END_OF_DOCUMENT_TOKEN_TO_BE_REPLACED 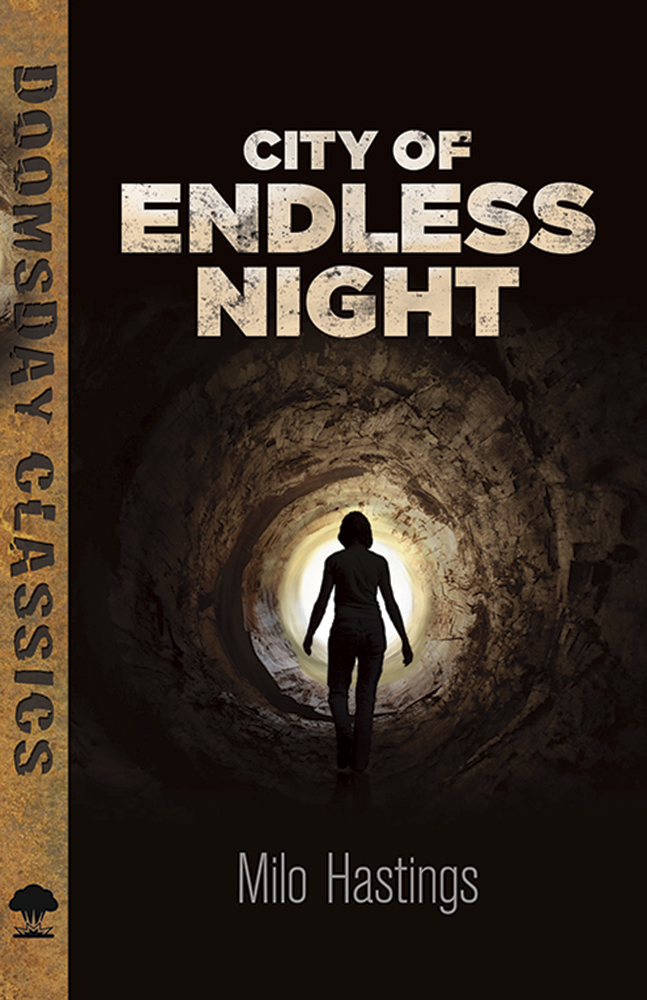 Yes, I was walking in Utopia, a nightmare at the end of man’s long dream – Utopia – Black Utopia – City of Endless Night – diabolically compounded of the three elements of civilization in which the Germans had always been supreme – imperialism, science and socialism.

It’s the year 2151. The German state, after sweeping through Eurasia and the Middle East in the Second World War which began in 1988, has been pushed back to the Armoured City of Berlin. The Ray, a weapon that calcifies bones, keeps the armies of the World State at bay. Aerial bombing cannot harm the vast underground fortress, the Black Utopia, which holds 300 million Germans.

But one man, Lyman de Forrest, a student of German culture and language from Chicago, penetrates its upper depths, impersonates one of its chemists, and learns its secrets. But should he destroy it with his knowledge? Or attempt to bring it into the larger family of the World State?

Hastings’ novel is an astonishing novel on several levels. END_OF_DOCUMENT_TOKEN_TO_BE_REPLACED

Being a fan of Stableford’s work, I immediately requested a review copy when I saw it on Netgallery. 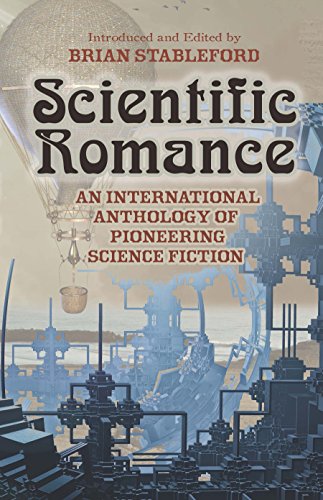 Before America colonized science fiction with its conquistador John Carter in 1912 and made it into a genre concerned with space and adventure, it was something different. It was, argues Stableford, a stream of literature interested in “the adoption of the scientific outlook and the attempt to employ the scientific imagination as a springboard for speculative fiction”.

Just as the Vikings colonized the New World before Columbus’s voyage, Francis Bacon and Savinien Cyrano de Bergerac discovered new frontiers for literature when they wrote scientific romances. And, just as the Viking colonization inspired no immediate imitators, no writers imitated Bacon and de Bergerac for a while. Bacon’s New Atlantis was unfinished and published posthumously in 1627. De Bergerac’s L’Autre Monde ou les Etats et Empires de la lune [The Other World] wasn’t published until the 1920s.

It wasn’t until the 19th century that authors in France, America, and England began producing work that was noticeably something different and that stuck in the public mind. These were stories about the drama to be made out of new scientific discoveries, new technologies, and the peculiar psychologies of inventors and scientists. END_OF_DOCUMENT_TOKEN_TO_BE_REPLACED

The alternate history series continues with some qualifying stories buried in this review.

“After a Lean Winter”, Dave Wolverton — This is the second time I’ve read this story, the first being in its original appearance in the War of the Worlds: Global Dispatches, ed. by Kevin Anderson. I still liked its story of Jack London, during the Martian invasion depicted in H.G. Wells’ The War of the Worlds, hiding out in the Arctic and watching a bloodmatch between dogs and a captured Martian. This time, though, (after reading Michael Swanwick’s “The Wisdom of Old Earth”, seemingly inspired by London’s The Sea Wolf), I was reminded that this is not only a clever use of London in the context of the central idea of alien invasion but also a further reworking of his theme of blood struggle in life and evolution.

“Thinkertoy“, John Brunner — It was a nice surprise to see one of John Brunner’s last stories here. It was written for the Jack Williamson tribute anthology The Williamson Effect. According to his introductory notes, Hartwell says Brunner died before he could write the afterword for the story, but Hartwell speculates that it was inspired by Williamson’s “Jamboree”, a story I have not read. That may be true, but I also was reminded of Williamson’s classic “With Folded Hands” since, like that story, we have a man coming across a vendor of wonderful robotic merchandise, robots which eventually turn out to be very sinister. Here a widower buys the remarkable Tinkertoys which are clever, highly adaptable robots which can (rather like Legos) be assembled into several different shapes and do all sorts of wonderful things: answer the phone in several, customizable voices with Eliza-like abilities to keep the conversation going, integrate various household electronics, serve as worthy opponents in various games, and household inventory control. His withdrawn son, traumatized by the death of his mother in an auto accident, takes a real shine to the toys and programs them for all sorts of things, helped by his older sister. The protagonist finds out that the chips used in the Thinkertoys were originally designed as a Cold War weapon. They were to be dropped behind enemy lines to conduct various acts of subtle industrial sabotage: jam electronics, loosen valves, start fires, and mess up bearings. The children eventually use the toys to try and kill their father (The cold, impatient, malicious intelligence of the children reminded me of those in Brunner’s Children of the Thunder.). As to why, they explain, simply, “He was driving.”, referring to the auto accident that killed their mother. END_OF_DOCUMENT_TOKEN_TO_BE_REPLACED

Since the heated up rhetoric before the U. S. Presidential election, I’ve been pondering doing a series on future American civil wars.

And the rhetoric has only heated up since then. (California seceding?)

Well, that’s not going to happen anytime soon. The project — not the war. Do you think I’m some kind of prophet?

(Though I would refer you to my reviews of Richard Peters’ Power Games trilogy for both a satirical yet militarily plausible description of how such a war might turn out.)

One of the books I contemplated reading and reviewing was the notorious The Turner Diaries.

I’ve had a copy for years but never got around to reading it.

J. M. Berger takes a look at it, and its political legacies in “The Turner Legacy“.

The same page has articles on its literary ancestors including works by Jack London.

I don’t buy all of Berger’s political assumptions and values, but it looks to be an interesting look at some dark (no pun intended) byways of American science fiction.

Incidentally, I would be happy for title suggestions for any future American civil war titles regardless of the political axes they might grind.

I’ve read and liked most of David Hartewell’s Year’s Best SF (which is no longer published) but reviewed few of them.

The one piece of dross comes from an unexpected source: William Gibson and his story “Thirteen Views of a Cardboard City“. It’s a minute, camera-eye examination of a cardboard structure in a Tokyo subway and obviously inspired by J.G. Ballard’s work. I detected no point to the series of descriptions, or, indeed, anything of a fantastical or science fictional nature.

Nancy Kress’ “Always True to Thee, in My Fashion” gives us a witty satire with a world where the seasonal variations of fashion cover not only clothes but also your pharmaceutically modulated attitudes.. The caged dinosaur of Gene Wolfe’s “Petting Zoo” represents not only the lost childhood of the story’s protagonist but a vitality lost from the race of man. Tom Cool gives us “Universal Emulators” with its future of economic hypercompetition that has created a black market for those who impersonate, in every way, the few employed professionals. In effect, the emulators grant them an extra set of hands. Its plot and characters would have done Roger Zelazny proud.

The voice of past science fiction writers echoes through many of the anthology’s best stories. Jack London’s The Sea Wolf provides the inspiration for Michael Swanwick’s “The Wisdom of Old Earth“. Its heroine realizes, despite whatever dangers she overcomes guiding posthumans through the Pennsylvania’s jungles, she will never bootstrap herself into being their equal. H.G. Wells looms over Robert Silverberg’s “Beauty in the Night“. Its child hero undertakes the first successful assassination of the brutal aliens that have occupied Earth, but his reasons have more to do with his oppressive father rather than the aliens’ behavior. John C. Wright’s “Guest Law” is a welcome return to the flashy decadence of Cordwainer Smith’s fiction. Its hero, a slave-engineer, watches in disgust as his aristocratic overlords corrupt the customary requirements of hospitality to justify piracy in deep space. Gregory Benford’s “The Voice” responds to Ray Bradbury’s Fahrenheit 451. Here the convenience of implanted intelligent agents, hooked up to a computer network, led to literacy fading, and not a repressive regime of firemen. Benford agrees with Bradbury about literacy’s value but also undercuts him on the supremacy of writing as a means of communication. END_OF_DOCUMENT_TOKEN_TO_BE_REPLACED