And I did pick up the first installment of Paul Finch’s  historical horror stories and read it on my birthday a few months back.

There are three tales in this book.

The best, in terms of its inventiveness and plot twists, is “The Blood Month”. It opens in 1030 at the Battle of Stiklestad in which the forces of Christian King Olaf are defeated by pagan Vikings under King Sveyn. Two brothers, Radnar and Ljot, escape the slaughter of their fellow Christians, but there are bounties on their heads, so they find themselves going to remote Greenland where their Uncle Sigfurth has a holding. Radnar, the oldest, has doubts about the wisdom of his conversion to Christianity, but Ljot, having adopted the faith at an earlier age than his older brother, doesn’t.

When reaching Sigfurth’s lands, they find hostility to their faith. But it’s muted because Sigfurth needs every warrior he can get. Something is killing his warriors one by one. The brothers offer to help end the menace whatever it is.

Yes, it does sound rather like Beowulf which Finch freely acknowledges when one of Sigfurth’s men grumbles, as that poem is abouted to be recited, that he doesn’t want to hear some Christian poem from those English dogs. But Finch’s plotting is masterful, and this tale doesn’t end as you would expect whether it’s the nature of the killer stalking the land, the trajectory of a romance between Ljot and a Christian slave-girl, or the course of the brothers’ Christian faith. And Finch ends his tale on a dark joke.

It’s London in the year 1581 in “Flibbertigibbet”. This one is sort of a Jack-the-Ripper story crossed with a spy-who-came-in-from-the-cold story. The story opens with the drawing and quartering of the Jesuit Edward Campion. Our hero, Robert Urmston, watches the event disgusted. Though born a Protestant, he is disgusted that his is a now a country where men can be tortured for their opinions. Subjected to strict military training after failing to meet the standards to become a laywer like his father, he used to work for Queen Elizabeth’s spymaster Francis Walsingham. But, sickening of his duties, he resigned from his job of hunting down Catholic subversives.

But Walsingham has other ideas, and Urmston finds himself back in the Queen’s employ with a job a little more agreeable to his conscience. Walsingham wants him to track down a killer who has tortured and killed six women in the Southwark section of London. These are divisive times, and Walsingham doesn’t want these crimes to be the spark that ignites the powder keg of the capital city.

END_OF_DOCUMENT_TOKEN_TO_BE_REPLACED

Since this is relevant to an upcoming post, I thought I’d re-post this review of mine from January 2, 2012 on the Innsmouth Free Press site. 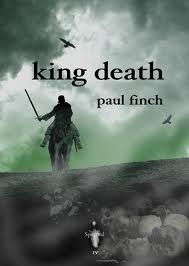 It is 1349 and England is in the grip of the Great Mortality, what later generations will call the “Black Death”. A caravan goes down a road, its coaches weighed down with tapestries and ermine-trimmed robes and gold cups. It is a train of the dead met by only one of the living.

His name is ‘Rodric’, a knight in black armour. The skull painted on his visor and shield proclaims him “King Death”, though he was born a peasant and was a mercenary before the Pestilence. But it is a handy mask for scaring the few living he encounters as he travels a land of unburied bodies, deserted villages and castles, looting where he can.

And then he meets one more of the living, a young page who believes his disguise, who offers to lead him to a castle full of riches, where all are dead, and only asks, at the end, to join his kin in death.

He gives us a quiet, unpeopled land of fallow fields, bloated bodies, and a smell of death that no perfumed sachet can conquer. The agony of the boy, the callousness and peasant cunning of Rodric as he seizes his one chance at a fortune, are shown well and often. The atmosphere is despondent. Even the hardened Rodric almost feels sympathy for the noble dead he finds, once his social betters and not yet his equals in death. The scenes are just what you want in a post-apocalypse story: moody and lurid.

And that was the beginning of the problem for me but maybe not for you.

It’s unfair of me to penalise Finch for my own limitations and one is that I generally don’t like historical fiction unless it has a substantial fantastical element in it. Otherwise, I often find myself always questioning if a particular detail is true and deciding I might just as well read an actual history of the time rather than fiction set in it. That was not the case here, though.

Instead, having read several books on the Black Death, I was too familiar with the setting. I questioned those unburied bodies when historical accounts have the English maintaining their social coherence during the Plague and burying their dead in a well-ordered fashion. Life went on there in the midst of death. Marriages were made, land transferred, boys apprenticed. The Plague never approached anything like the mortality rate we see and hear of in this story.

In short, things were bad then but not that bad.

And, while I hoped for a story of dwindling and threatened life or a desperate, fantastic revel in the manner of “The Masque of the Red Death”, I got, ultimately, a classical horror story ending which, for me, didn’t work here tone-wise.

Your experience, though, may be different because Finch is an effective writer. He’s not given to anachronistic characters or language. The story is so full of medieval terms, most having to do with arms and armour, that there is even a two-page glossary at the end.

And, beyond the formulaic climax, the story’s concluding imagery is satisfying.

While I was disappointed by this story, I did like it enough to go to Finch’s personal website. I’m intrigued by his Medi-Evil series of anthologies featuring historical horror and fantasy. I suspect, with another historical setting, my critical brain will let Finch’s prose take full effect.

If your brain is more flexible than mine and thinks King Death sounds like your thing, you may have to wait awhile. This chapbook appears sold out, but, of course, the story may be reprinted elsewhere in the future.

This one came to me as a review copy through LibraryThing. I asked for it solely because it had stories from Reggie Oliver and Paul Finch.

This could have been titled Best British Weird Stories 2018 because the anthology has some of the flavor of those Year’s Best Weird Fiction put out by Undertow Publications. Most of the stories are not horror of the visceral, gruesome, and frightening sort. They range from surrealism – mostly pointless – to well-done variations of old horror situations.

The Reggie Oliver stories did not disappoint even if one, “A Day with the Delusionists” is a satire on poets and Oxford University, wit and no horror though there is a murder. The Delusionists is an Oxford club of students, and, at one of their costume parties in 1973, an aging poet ends up dead.

The other Oliver story is decidedly something else. First appearing in a theme anthology built around Oscar Wilde’s The Picture of Dorian Gray, “Love and Death” reverses Wilde’s premise of a portrait that absorbs the moral and physical failings of its subject. Here the circus strongman, who stands as the model for Love in the titular painting, begins to weaken. Too late, the painter realizes that, John Keats to the contrary, beauty and truth are not the same as the figure of Death changes in the painting. END_OF_DOCUMENT_TOKEN_TO_BE_REPLACED